I can’t remember where I heard of an anthology looking for submissions about what clowns fear. Probably from my friends at The Midnight Society. Probably. They are on top of everything horror.

I decided to try and tackle the subject. We’ve all read the killer clown stories, but what do clowns fear? As usual, my brain spat out the strange not-so-good ideas…

Clowns are afraid of…

UGH WHAT? Maybe I should give up and not write this?

Stories never solidify until I have a theme. What about that side of ourselves we don’t like, the part we hide, the part that we can’t get rid of…

And I drafted a creepy little tales of Freckles the Clown, the moment when he decides to face his fear, the man behind the mask.

But it doesn’t go well.

The first draft flowed pretty easily. Don’t you love it when that happens? I had a clear path and just wrote. After reading it to my writers’ group, I realized the reveal could be better…the tension could be upped. It didn’t take too long to get it where I wanted it. After another couple people read it, I knew I was good.

So I submitted it, thinking that it might not even be close to what the editor wanted. But I had to try. I liked this little story.

When I got the e-mail, I opened it, prepared for the rejection, but he was amused by my inversion of the killer clown trope and accepted it. Amused…he was amused. This is the best thing I had ever heard!

Anyway…edits appeared. I think he changed one punctuation mark and added another.  Easiest edits ever.

And I waited…an e-mail graced my in-box with news that he had everything ready to go and had found a cover artist.

Not too long after…the cover was sent.

Next I learned that it was to be released on Friday the 13th! Epic.

I got my copy today!

Seeing your name in print is pretty cool. I don’t think I’ll ever get tired of it. 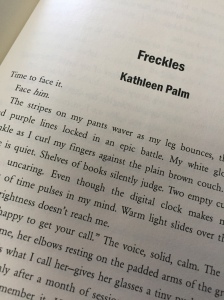 I haven’t had a chance to read all the stories yet, but I’m excited! For those interested in getting your copy…let me show you the new anthology BLOODY RED NOSE: 15 FEARS OF A CLOWN…

In a world filled with menace, dare to paint on a grin.

The world is full of images of scary clowns: packs of grinning figures with knives plaguing towns; pom-pom clad serial killers; loners who like children in the wrong way.

But clowns can be a force for good: it takes a kind heart to put other people’s joy first; keeping children entertained is honest work; what better disguise than one that makes the villains laugh?

What if, rather than being childhood-spoiling serial killers, clowns were the victims or heroes of the story?

When all the children at a party are poisoned, an entertainer’s profession and past both make him a prime suspect.

An anti-corporate prankster discovers his guru might be just as callous as the capitalist world-view he claims to reject.

A clown attempts to redeem the image of his profession by saving a group of teenagers from a serial killer.

Find it on Amazon…

At Barnes and Noble in either…

My Tweets
Join 10,370 other subscribers